Professor Ofer Aharony of the Weizmann Institute of Science in Rehovot wrote on Monday Ariel University in the West Bank is the wrong venue for a science conference. Aharony, together with 14 other academics, published an open letter in The Guardian referring to the conference on cosmology and particle physics that is scheduled to take place this week at Ariel University in the West Bank. 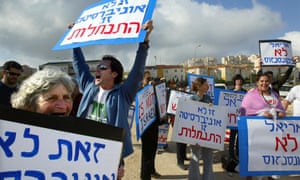 An Israeli university on the West Bank would be a university for the occupation sciences; it must not happen.

Ariel versus Academia – The Daily Beast.

The conversion of the college in the settlement Ariel (occupied west-bank) to a research university endangers the entire Israeli academic establishment.

1. Academia in the service of a political ideology

Historical examples where the academia was recruited for, or agreed to follow, political aims of the ruling power ended up in destruction of the academic activity, and a mortal damage to its reputation and integrity.

On 14/1/2011 Prof. Karmi (head of the Council of Heads of the Universities in Israel) said: “A top principle in the world of science, research and teaching is that the academic activity should be detached from ideological or political directives”. There is no doubt that a university in Ariel will not allow academic activity that abides by this principle.

2. Identification of the entire Israeli academic establishment as supportive of the settlements and occupation policies

If the Council for Higher Education and the Planning and Budgeting Committee, which are the bodies that manage higher education in Israel, will agree to accept Ariel University into their fold, there will be an inevitable identification between the entire Israeli academic community and the policy of settlements and occupation. The ties between the Israeli academia and our counterparts around the world, at institutional and personal levels, are numerous and deep, and without them we would not be today at the forefront of the scientific world. A majority among our colleagues from around the world, who love Israel and seek to be involved in academic activity here, object to the occupation and the settlements policies.

A selective academic boycott already exists today: Researchers in Ariel are barred from applying to research grants in many international granting agencies (such as the US-Israel bi-national science foundation and ERC), and are compensated for this by a special fund set up for them by the Ministry of Science, to which only they can apply (it is not open to other Israeli researchers).

Identifying the entire Israeli academia with the policy of settlements will place it in grave danger.

The college in Ariel was established as part of a vision whereby Israel continues indefinitely its occupation of these territories. This policy rules out the establishment of an independent Palestinian state, and inevitably leads to the violent repression of the Palestinian population. The Palestinians living in the region of Ariel are barred from entry into the settlement and the college. An academic institution that is not serving the population around it, and in fact ignores and alienates the local population, can not be part of a free academia in a democratic state.

The Israeli academia has flourished so far due to it being a part of a free, democratic society, with close ties to the academic communities of democracies around the world. Mixing the Israeli academia with the ideology of occupation and settlements undermines these ties, and compromises its functioning.

The continuing occupation and settlements policies destroy the democratic foundation of the state of Israel. Democracy is the essence of the academic establishment, and we therefore see it as our duty to stop the attempt to recruit the Israeli academia in the service of the occupation effort.

1. Call on Minister of Education Gideon Saar to stop the move to recognize Ariel college as a university.

2. If such a move is brought before the Council of Higher Education, we call the members of the council to vote against this proposal and to reject it. Giving official sponsorship to Ariel University by the council will put in danger its reputation abroad and its ties with international academic institutions.

3. If such a decision to upgrade Ariel college should pass, we call for all conscientious members of the Council of Higher Education to resign in protest. Members who will remain on these committees following such a decision will bear full responsibility for the destruction of the Israeli academia.

4. We call on the heads of the existing Israeli universities to refuse to accept the representative of Ariel University into the Council of University Heads.